The picturesque Maria Wörth on the southern shore of the Wörthersee is one of the loveliest pearls of the landscape in the garland of Carinthian beauty. When its Gothic pilgrimage church is lit up at night, it shines out over the entire lake from its peninsula which was a true island up until 1770. The many people who gaze upon it feel that this venerable witness of a great past is like an incredibly beautiful fairy tale. Tens of thousands of holidaymakers visit Maria Wörth every year to experience the history and culture of the Wörthersee at first hand, as it were. 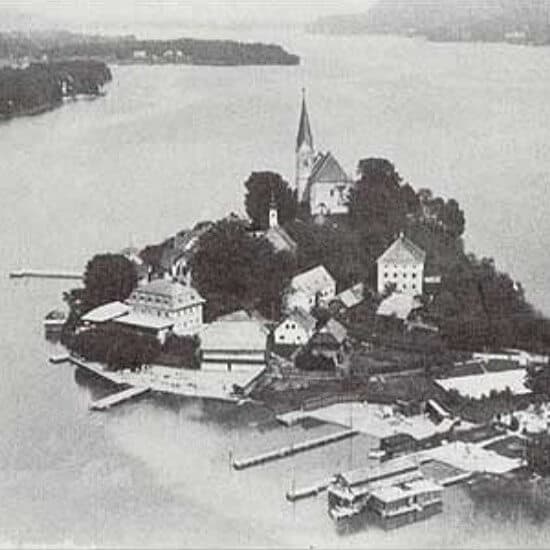 As early as the year 763, the Bavarian diocese of Freising had received via Duke Tassilo III land ownership in the area of ​​Innichen – now San Candido – in Pustertale. With this gift Freising had, however, also taken on the ducal order to convert the pagan Carantanians living in the east to Christianity. Just before this, the Bavarians had been called by the Slavs to Carantania – such was the name of Carinthia at the start of the Middle Ages – because the Slavs wanted to shake off the bitter yoke of the Avars. The Bavarians had come and, with the Slavs, had driven the Avars out of the land, remaining from then on the masters of Carantania. Around the year 830, or a few decades later, the bishops of Freising based in Innichen founded the daughter church Maria Wörth on the island in the big lake.

In Maria Wörth itself a church dedicated to the Virgin Mary was built as early as around 875 on the highest plateau of the island. Under Bishop Waldo, the relics of Saints Primus and Felician, who had suffered martyrdom under the pagan emperors Diocletian and Maximian in the years 286 and 287, were brought from Rome to Maria Wörth and buried solemnly here in the crypt. As a result, the church soon achieved a considerable reputation as a mission centre on the Wörthersee and became a special place of devotion. An attempt was even made to designate the lake, which at that time still had no proper name, as “lacus S. Primi et Feliciani”. However, this name did not prevail, and so it remained ‘Holm’ – i.e. island lake. 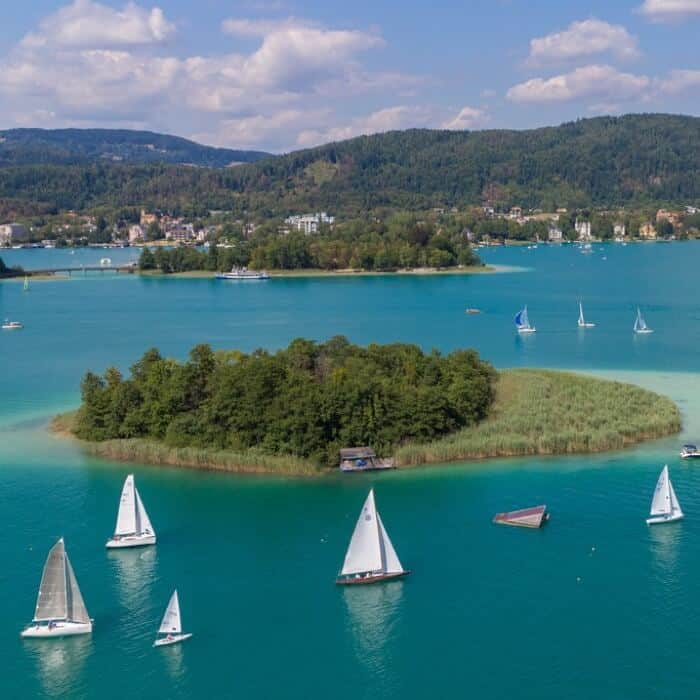 Bishop Abraham of Freising (957-993) stayed for a long time in Maria Wörth to escape the further political turmoil of those years. Here the bishop remained apart from any political activity, but carried out a great deal of religious work and founded several churches in the surrounding area from his island home, and for this reason, he appointed more priests to Maria Wörth. He gave the mother church on the Wörthersee numerous valuable objects such as new vestments, silver chalices with patens, two beautiful censers, precious missals, scarlet altar cloths, a biography of St. Primus and St. Felician and numerous valuable handwritten books.

The importance of Maria Wörth as a spiritual, economic and colonising centre in the heart of Carinthia continued to grow in the following years, with the result that Bishop
Otto I of Freising, a son of Margrave Leopold III, later Saint Leopold, and a great historian of the High Middle Ages, founded the second collegiate monastery in Carinthia between 1146 and 1150 in Maria Wörth.

From then on, the former church of St. Mary with the burial place of the two Roman martyrs in Maria Wörth was elevated to the rank of priory church. For regular worship, however, a second, smaller church was built or extended, which still exists today by the name of Rosary or Winter Church. It was consecrated in 1155 by Bishop Roman of Gurk and also had a cemetery, which was, however, later abandoned.

The new parish church was known as the “Winter Church” because the anniversaries of those saints who were venerated in her, fell in the winter. The priory church Maria Wörth was accorded special respect throughout the land. Its provosts even had a right to vote in accordance with their numbers in the representation of the estates in Carinthia. 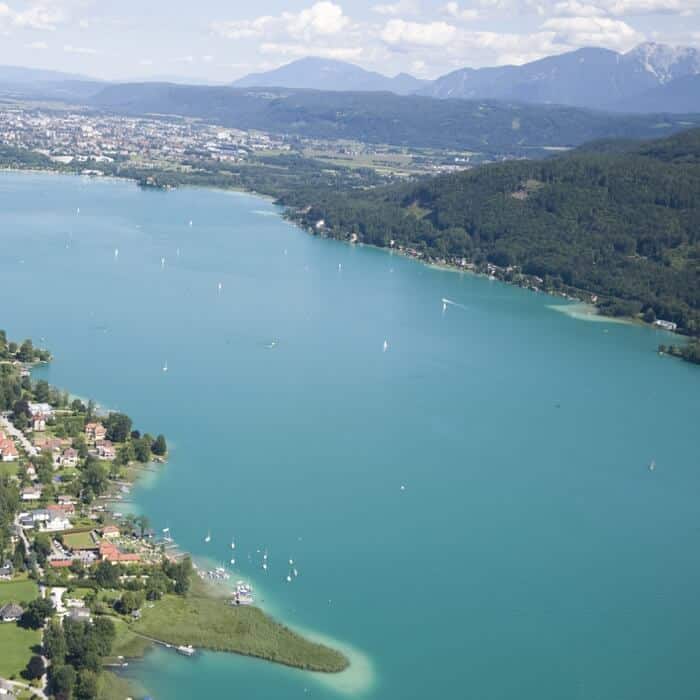 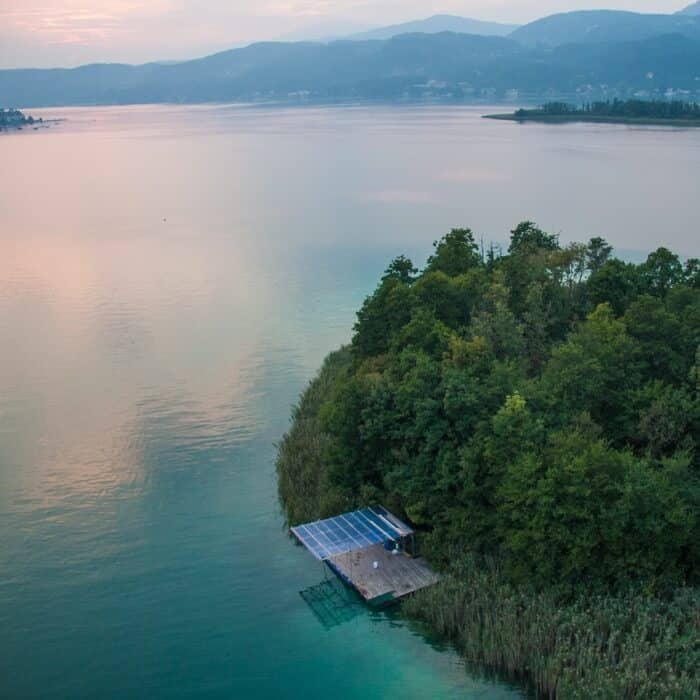 In the following decades, however, the priory church Maria Wörth also experienced bitter blows. During the period without an Emperor, some noblemen in Carinthia tried to take advantage of ecclesiastical assets. And so the Viscount of Hollenburg and his attendants raided the priory church on the island, broke down the church gates and ransacked the house of God. When the Emperor had again created orderly conditions, Provost Heinrich provided an ossuary in 1278 in Maria Wörth in honour of St. Catherine, St. Elisabeth and St. Magdalena, and in conjunction with this, a new benefice for a dean was created so that a mass for the dead could be read every Monday in the ossuary. This venerable ossuary still stands in the south eastern part of the collegiate church; surrounded by the wrought-iron grave crosses, it serves as a memorial to the transience of all earthly life and completes the tripartite group of buildings on the peninsula, creating a uniquely beautiful and evocative image.

In 1399 the collegiate and parish churches on the island were destroyed by fire. Both churches were indeed rebuilt, but the work went very slowly. Only around 1420 was the small parish church resurrected, albeit with Gothic windows. Several decades later, the priory church was also rebuilt, this time in the Gothic style. Later on, this historic church of pilgrimage received a beautiful baroque interior.

Around 1500, the star of Freising on the Wörthersee appeared to fade. Even in the years prior to this, the priory church had been reduced to a sinecure i.e. to a benefice without official duties. Emperor Maximilian I finally handed the priory church Maria Wörth over to the order of the knights of St.George in Millstatt.

With the handover to the order of Jesuits on 25 July 1598, the second oldest priory church in Carinthia ceased to exist, because the new order recognized no such establishments. When in 1773 Pope Clement XIV banned the Jesuit order, Maria Wörth became a secular parish. When the St. .Paul Benedictine monastery was reopened in the Lavanttal in the year 1809, the parish of Maria Wörth, together with the rule of Leonstein bei Pörtschach, was given to the Lavanttal monastery, which from then on exercised its patronage over the former Freising foundation. During the reign of Emperor Joseph II, who rearranged church affairs in his monarchy, the island of Maria Wörth and the mainland became connected, so that it was now possible to reach without a bridge that beautiful piece of land on which one of our oldest churches stood. 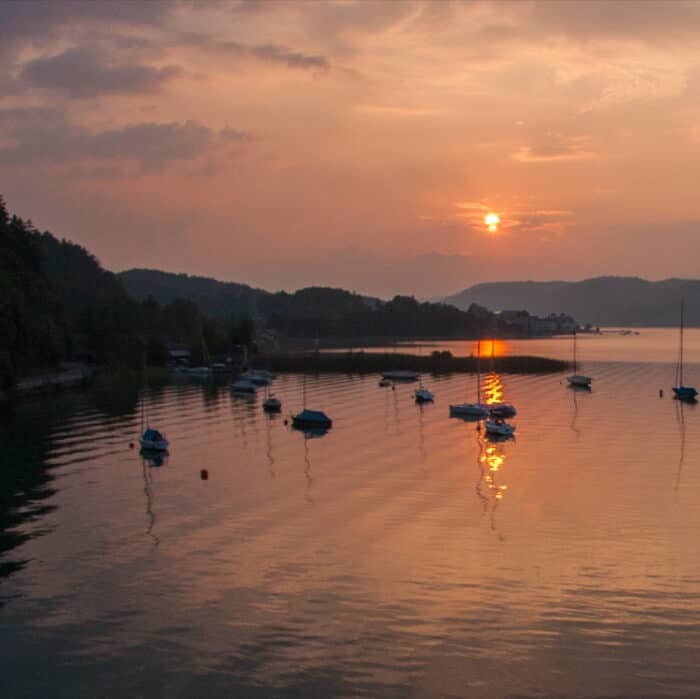 The former collegiate church rises impressively from the midst of the cemetery to some 20 m above the surface of the lake on the highest plateau of the rocky island. A covered walkway leads up to the church, and the graveyard with its elaborate wrought iron grave crosses is entered via a late Gothic semi-circular arch. All that remains of the former Romanesque church is its beautiful south portal with three recesses from the 12th century, small sections of the nave and the crypt. To the right of the portal can be seen a late Gothic structure with an alcove for offerings. In this, there is a relief which is thought to show St. Primus and a coat of arms of the master builder Lienhart Märtl with the year 1540. The master builder Märtl had been working here since 1517 and he completed the Gothic building in 1540. A fresco of the Mount of Olives dating from 1521 adorns the south face. An enormous St. Christopher from the year 1658 looks down on the many visitors from the exterior west wall of this dignified sacred building. The interior of the church is divided into a twin nave with mighty buttresses. The two Gothic choirs are contained within five sides of an octagon. In the main choir which is elevated by five steps, there is simple star rib vaulting with semi-circular arches and keystones. The church has a refined and ornate appearance. In the high choir, the late Gothic icon of the Madonna, originating from around 1460, stands on the Baroque high altar of 1658. It is flanked by the statues of St. Primus and St. Felician. In the upper part of the high choir, a painting shows the Coronation of Mary in heaven. On the south wall of the choir is another miraculous image from Italy, consecrated by Pope Paul II in 1469. Two Gothic panels also hang here, representing the Church Fathers Gregory and Jerome; the panels are from the former Gothic winged altar, which had to make way for the Baroque in the era of the Jesuits.

In the nave is a Baroque crucifix altar, which is arranged around the magnificently carved crucifix from the early 16th century. Next to it is the graceful pulpit, an excellent work with rich sculptural decoration from 1761; its silver relief carvings are a special attraction. In the middle of the staircase leading from the nave to the main choir, is the way down to the Romanesque crypt where several columns support an impressive cross vault, which the Jesuits had adorned with the pattern of tendrils in the 17th century. The walls of the crypt reveal poorly preserved frescoes from the 15th century. Buried here are the remains of the patron saints of the former island church, the martyrs Primus and Felician. In the renovated Rosary Church services are held in summer for Protestant guests. In this way, Maria Wörth has, in recent years, put ecumenical thoughts into action. To the west of the Collegiate Church, on a modest hill, is the small Romanesque Winter Church. Its former cemetery wall is still standing. The church has a wooden porch and a square-shaped choir on the western side. The onion dome on the wooden roof turret is from the Baroque period. In addition to the round-arched west portal there is an offerings niche marked with the year 1524.

This church received its present form after the fire of 1399. The Winter Church also has various sacred works. Most admired in its choir are the Romanesque frescos from the 12th century, which are among the most valuable monuments of early medieval painting in the Alpine countries and which were uncovered in 1895. They represent Christ enthroned, surrounded by the twelve apostles who are pointing allegorically towards the Assumption. From: Matthias Maier Brugger, Holiday on the Wörthersee, Klagenfurt 1974

An immortal Carinthian song and a romantic grave stone

On the east side of the church of Maria Wörth is a grave stone with the inscription: “Ottilie von Herbert, born July 18 1825, died in an accident in the Wörthersee on September 26 1847. I will come again and receive you to Myself, that you may be where I am. “

On that fateful September night Ottilie von Herbert was killed during a boat trip. Or did she choose to die? Was it a capsizing of the boat in the dark night sea? At Baroness Ottilie von Herbert’s piano was found her hauntingly beautiful composition in a minor key with the sad text: “I tua wohl, i tua wohl / als wann ma nix war, / aber drin in mein herzen, / da is ma so schwar …. “